Move over Beyonce. Last week it was I who broke the internet! I sent out a tweet last week that read “Going over my mint budgets today. I spent $43 on #groceries this month, $25 on two meals out. $68 total on #food for the whole month. wowza”

That’s right. I spent $68 on food total last month, including two meals out. Ultimate frugal win! Obviously, this is insanely low and the Twitterverse demanded to know how I managed such a thing.

I’ve mentioned periodically throughout this blog that I eat a lot of catering leftovers. I wrote a post on just how much I depend on them almost exactly a year ago! Today I’m going to take you more in depth through a catering event, how I take the food and what I do with it once it’s home with me.

To recap: I work part time for a catering company, usually once or twice a week. 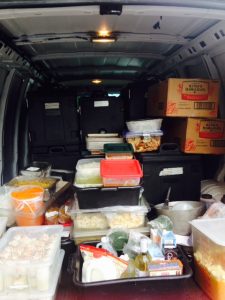 The back of our catering van, pre-unloading at an event

Of course, all the food for an event is ideally going to be eaten by the clients. Usually though, we make too much food. It’s always better to be over prepared when it comes to food. Inevitably one dish is super popular, or someone changes their mind about their entree, and you’ll want to have a lot of back up.

I work for a custom catering company, meaning we don’t have a standard menu. We’ll make anything the client wants. That means a lot of variety in the foods we serve and the ingredients we use. 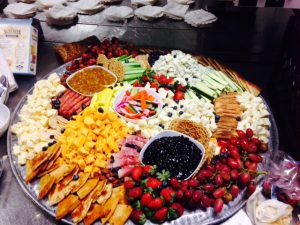 A beautiful cheese/fruit/veggie/cracker display, behind the scenes

According to the health code, food that has been ‘out’, meaning either unrefrigerated or re-heated too many times, is not safe to serve in a professional context. It should be disposed of.

While we do have ovens and refrigerators on most sites we cater at, it’s not always possible to keep food out of ‘the danger zone.’ The danger zone refers to the temperature food reaches where it will begin to breed bacteria. If food gets anywhere close to that temp, no reputable food service place will serve it. One event where someone gets sick is enough to ruin a company. Enter me. 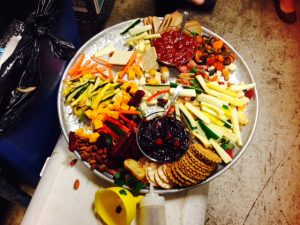 The food I take home will literally get thrown in the trash if I don’t take it. In the photo above, that tray has almonds, sliced green and yellow squash, crackers, strawberries and carrot sticks. A cheese tray usually sits out for 2-3 hours, so the cheese is pretty gnarly afterwards. Those crackers and veggies though? The almonds? Still good!

As I mentioned before, we usually bring too much food. So for those that are grossed out by thinking that people are eating food off a tray that’s sat out for hours and other people have picked over, let me put your fears to rest. While I would be lying if I said I had never eaten food off an old tray, I don’t bring that food home.

We will literally have bags of cut up veggies and cheese, and boxes of crackers as back up. We bring it to ‘replenish’ the cheese tray while it’s out. For an event with 300 people, one bag of cheddar cheese won’t cut it! Sometimes we won’t go through the back up food, and THAT’S what I snag to bring home. It’s been chilling in the fridge all night long at events. 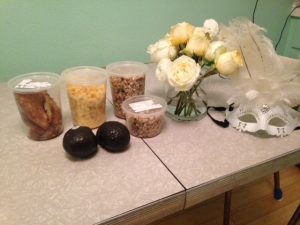 My most recent score

Last Saturday I worked an 11 hour wedding. We had appetizers, dinner and dessert for the guests. I was able to take home one and a half containers of grilled and diced chicken, three tilapia fillets, a container of mac-n-cheese and two whole avocados. I also took some roses from the table centerpieces and a Mardi Gras mask. (The masks were party favors and the wedding coordinator gave me permission since there were a ton left over.) Flowers are often trashed after events as well.

This was actually a very light haul for me. I’ve been trying to limit my dairy intake and a lot of the food we served had cheese all over it. (I succumbed to the mac-n-cheese.) Even so, there is enough food there to supplement my food shopping for an entire week.

For example, yesterday I used one of those avocados in my breakfast eggs. Today I had whole wheat pasta with some of the grilled chicken seen here and asparagus for lunch. Tonight for dinner I’ll have one of those tilapia fillets with some veggies. #cateringleftoversaremylife is so true.

With at least one event a week, I’m able to live pretty much off of catering leftovers. In fact, last February I didn’t buy any food. I only ate catering leftovers. As you may have noticed though, sometimes it can be difficult to get healthier options. Veggies aren’t guaranteed. These are PARTIES I work- people want delicious and comforting food! So a lot of the time I’m bringing home cheesy potatoes or pasta, or white carbs. All free, but not the best food for me.

So I usually buy vegetables and things like rice, beans and pasta at the grocery store. My grocery bill hasn’t been over $80 a month in more than a year though. Much as catering drains me and is work I don’t enjoy, it’s a huge asset to my budget. I save so much money! I often feed myself and three roommates, as well as my boyfriend. It’s been a critical part of my debt payoff and savings rate this past year and change.

There’s my $68 food budget! What do you think- smart or weird?