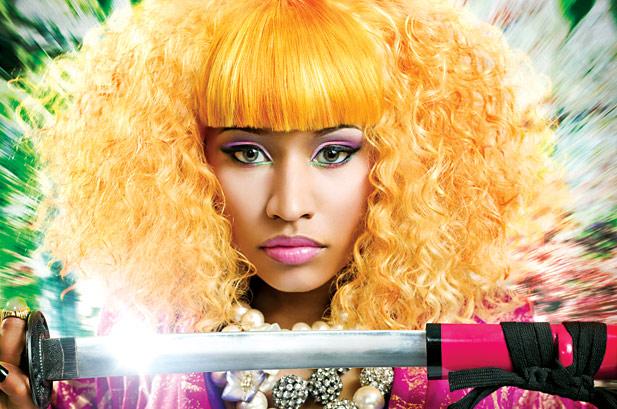 Nicki Minaj is a woman-one who is making sure no one forgets that. Through both her lyrics and her appearance, Nicki Minaj has confronted the male gaze and championed over it. She displays herself as a hyper-female woman in the mostly male dominated world of hip-hop and mainstream music.

Being a woman in music is difficult. The pressures on your body, your presentation to the world and your talent are huge. They are also very different from the pressures and expectations of male artists. Women must prove their value by being talented, polished, credentialed and of course, sexy. At all times sexy. They must look good, or why are we even paying attention to them? Because of course, women don’t make real music or good music. They make marketable music and they shake their asses around. Leave the real work to the men honey,  and slip on that sparkly see-through outfit.

Ever since her debut album, 2010’s Pink Friday, Minaj has had this type of criticism leveled at her. Hip-Hop defines itself in part through traditionally masculine values: strength, the ability to overcome obstacles, revenge, violence and respect. These are things and traits constantly denied women in society and associated with men. Since the inception of hip-hop though, women have been deeply involved in the genre. Minaj in particular has met the masculine narrative with a hyper-feminine one.

Cheryl L Keyes wrote that women in hip-hop have created four categories for themselves: The Queen Mother, the Fly Girl, the Sista With Attitude and the Lesbian. (That’s the Joint! Keyes 268) Nicki Minaj has re-defined the 80’s Fly Girl to create a new mainstream image of women in Hip-Hop.

The Fly Girl is defined by her independence and ownership of her sexuality. Specifically, Fly Girls do so through highlighting parts of Black women’s bodies that have traditionally been shamed. Deborah Roberts writes that Fly Girls take control of their sexuality “by wearing clothes that accent their full breasts and rounded buttocks and thighs, considered beauty markers of Black women by Black culture” (Roberts, 1998). Historically, Black women have been mocked and devalued for their bodies. The example of Saartjie Baartman is most telling. She was a South African who was exhibited in Europe for years as part of a freakshow. Promoted as having ‘highly unusual body parts’ (her large buttocks, stomach and breasts), she would emerge from a grass hut, covered only in beaded jewelry (that was not part of her actual culture) and dance for English audiences. After her death her body was dissected and her remains displayed in a Parisian museum.

This is something Minaj has done flawlessly throughout her career. Most recently her Anaconda video shows control and celebration of her body. She talks about her butt, and the power that it provides her over men. She uses her body as she pleases, dancing, strutting and touching herself. She surrounds herself with fellow black women and dances with them, a part of the crowd. At the end of the video Minaj dances provocatively in front of a seated Drake. As soon as he goes to touch her body Minaj flings his hands off and walks away. She is in control of her body, not Drake. A Fly Girl is an independent woman who makes all decisions for herself.

Minaj has taken the sexual liberation of a Fly Girl and put a modern twist on it. Her dedication to neon clothing, absurd wig styles and colors and over the top make up remove her totally from the male gaze. Minaj is in complete control of everything about her image. Everything we know about her is on her terms. As her career has progressed her outrageous style has calmed down. More black, less neon. However, this shift wouldn’t have been possible if she hadn’t spent the last three years in highlighter colored bras and wigs. By presenting herself as a woman outside traditional American definitions of what is sexy, Minaj has made audiences notice her as a person. By aligning herself with female colors and norms, she has made audiences notice that she is a woman in a man’s world. 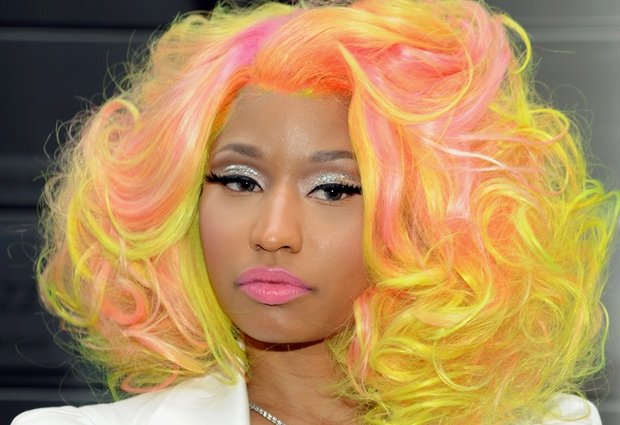 Since her introduction to the mainstream, Nicki Minaj was there to succeed beyond the men in the rap game, there to dominate as no woman had done before. In a world where women are often considered things, objects to be collected by a man on his way to the top, Minaj refuses to let you see her as anything other than a woman. Nicki Minaj will tell you how she ruined your career in a pink wig and tulle skirt. (Monster, 2011) Her three albums all have the word ‘pink’ in the names- Pink Friday, Pink Friday: Roman Reloaded and The Pinkprint.

On 2010’s ‘Bedrock‘ Nicki raps “Okay, I get it, let me think, I guess it’s my turn/Maybe it’s time to put this pussy on your sideburns”, a direct reference to receiving female head. Again, Nicki does this while wearing a bright pink bra and a pink and black wig. She is the only one in the room with a pussy and she’ll make you eat it.

On her most recent single ‘Only‘ Minaj opens the song with the lyrics “Yo, I never fucked Wayne, I never fucked Drake/On my life, man, fuck’s sake/If I did I menage with ’em and let ’em eat my ass like a cupcake.” Drake and Lil Wayne each have verse, both of which also open with “I never fucked Nicki’, following her lead. In her verse, Nicki dismisses rumors that her success is from sleeping with her crew. She also positions herself as the dominant force in the hypothetical threesome- if she were to ever sleep with them, it would be at the same time and they would do as she asked.

In the ‘Only’ music video, Minaj’s female power has come into full bloom. She has created a dark and bleak world where the men are bound, bleeding and at the mercy of women. Minaj herself wears black lace and carries a riding crop. Only Drake and Lil Wayne may move around the space and even they are lost and confused. Womanhood reigns supreme in this world Minaj has created. It is a reflection of the career Minaj has built for herself.

One Reply to “On Nicki Minaj and Being Relentlessly Female”